On 20th February 2017, the main social media account of a prominent Chinese women’s organisation, Feminist Voices, was shut down for 30 days. The group had publicly shared their support for the women’s strikes in the USA planned for March 8th, by posting a link on their Weibo* page. They were not calling for Chinese women to strike, they were simply showing their support for anti-Trump demonstrations occurring elsewhere.

But China strictly prohibits political resistance and public demonstration of any kind. They received a message stating, ‘Hello, because content you recently posted violates national laws and regulations, your account will be banned for 30 days’. This prompted waves of support from women the world over, with images pouring in from overseas Chinese women who attended demonstrations, but nothing has changed the fate of Feminist Voices’ public platform.

Hearing this news, I checked on my own web presence. A piece I wrote for a major Chinese media platform had vanished with no explanation. Just days after its publication on 13th February, the link my editor had sent, and that I’d shared with family and friends, stopped working.

I had interviewed a wonderful woman writer whose recently released debut novel deals with themes of migration, class, and gender inequality through the lens of sex workers in Shenzhen, southern China. I was not aware that the content of our interview might be regarded as even remotely incendiary.  I’d struggled over edits and pitched numerous publications. In the end, all that hard work got me was a blank screen and 404 error message.

Recently, I volunteered to help organise a public celebration of women to be held just days after International Women’s Day. We lined up novelists, poets, storytellers, actors, comedians, and activists who wanted stage time. We found a handful of organisations to provide free information. We decided to fundraise for an NGO supporting transgender teens in southern China. We arranged sponsors, a venue, and a poster. We invited guests.

Just six days before the event was due to take place, we got a message from an LGBT rights activist and founder of Beijing’s LGBT Center, who was due to take part in the panel discussion. Her lawyers had been contacted by police, and recommended we use caution, if we chose to proceed at all.

Her last attempt at speaking at an IWD event was met with suspicion, too. She got phone calls from the authorities telling her not to go to the 2016 Beijing Literary Festival event she was billed for. When she showed up, she was threatened by police at the door and decided not to risk arrest. A year earlier, five young feminist activists were detained for five-weeks without being sentenced, because they’d planned to hand out fliers about domestic violence on public transport.

She and other Chinese participants had the ovaries to forge ahead, hoping to ensure the event would happen if they could. They are well versed in the consequences of addressing sensitive issues in public. But as a bunch of foreigners, we couldn’t be sure of the repercussions for ourselves, our guests, or the cause we believed we were supporting. Ultimately, we had little choice but to cancel, while hoping that bowing out now provides us space to come back stronger another day.

The scariest thing about censorship is that it’s so covert. There is no reason given, no apparent logic behind censorship (only a vague sense of clamping down ahead of political events, such as the ‘Two Sessions’ annual congress in March). Feminist Voices were told they’d broken Chinese law, but not told how. My article had disappeared without a trace, the editor promising to ‘look into it’ before going silent. The authorities had not explicitly told us to cancel the event, we’d not been contacted directly (we didn’t event know which of the vast array of ‘authorities’ we should appeal to). The vague threat that we’d been ‘found out’ was enough to scare us into compliance.

The difference between the cancellation of our one-time event, or the disappearance of my one-time article, and the plight Feminist Voices represents for feminism across China, is obduracy. The majority of that handful of foreign women dabbling in women’s rights activism will leave China, sooner or later. They have the choice to leave censorship behind them. Chinese Feminists, in and outside China, however, will continue to face persecution for their beliefs and risk fates far worse than censorship if they push the envelope too far. Their futures can only lead towards assessing their role in the battle for gender equality against their personal safety.


* Chinese state-owned microblog platform akin to Twitter, which is blocked in China

The author is from Norwich, UK and is currently based in Beijing, China, where she teaches English Literature at a state university, and writes about gender and culture in contemporary Asia. Her writing has featured in various media outlets in China and the UK. Read more at www.zhendegender.com

Posted by Words and Women at 13:46 No comments:

A few more photos of some of the readers at our launch of Words And Women: Four 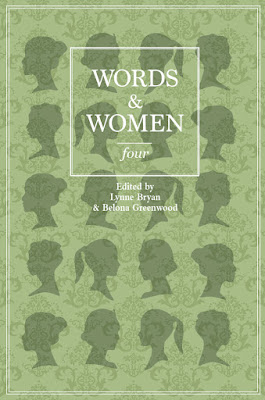 Posted by Words and Women at 05:55 No comments:

Days 5 & 6 of our celebrations

Our week of celebrations ended with a noon-day reading by Kate Cox of extracts from some of the highly-commended entries to our prose competition, the completion of Clare Jarrett's response to Deborah Arnander's winning story The Wife and her noon-day talk about creating her installation, and our launch in Nunns Yard Gallery of our newest anthology Words And Women: Four. Here are a few photos from these events. We will put more up over time - today we are having a rest! - but in the meantime would like to thank our collaborators Print To The People, Clare Jarrett and Chalk Circle Theatre Company,  everybody who took part in the celebrations, who gave up their time and their considerable skills, and everybody who came along to see the art, hear the readings and watch the performances. Thank you!

Day 4 of our celebrations

Today Su Squire read The Wife, the national winning story from our prose competition,  in Nunns Yard Gallery. The artwork is by Jo Stafford from Print To The People and is in response to the story written by Deborah Arnander.

Tomorrow at noon in the gallery Kate Cox will read three extracts from highly-commended works included in our anthology Words And Women: Four. The extracts include the start of a non-fiction piece Dear Shadow by Kate Feld, the beginning of a short story called  Sorry Business by Lilie Ferrari, and another called Private Parts by Cherise Saywell. For more details see our dedicated blog page IWD 17.

Today has also been Day 4 of Clare Jarrett's residency in 13A which is just down the road from Nunns Yard Gallery. She too is working in response to The Wife and was paid a surprise visit by the story's author Deborah Arnander who dropped in to see her work.
Posted by Words and Women at 09:03 No comments:

Day 3 of our celebrations

Going High  - named after Michelle Obama’s exhortation  ‘when they go low, we go high’ - took place at different locations in Norwich. 5 women - Camilla Balshaw, Adina Levay, Haleigh Diane-Kling, Su Squire, Kate Cox - acted as a form of street busker but with words not music.  They  read inspirational words written by women at different pedestrianised locations in the city centre.
Adina Levay, Artistic Director of Chalk Circle Theatre Company, staged the event  in collaboration with Words And Women in aid of the charity ECPAT - http://www.ecpat.org.uk/ > Campaigning against child trafficking and transnational child exploitation.
To read an article on the event published in the EDP click here 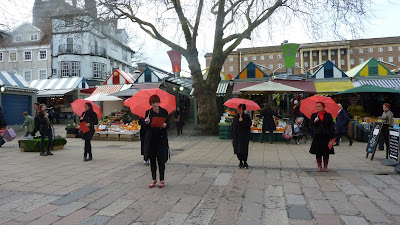 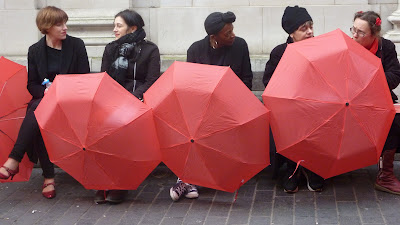 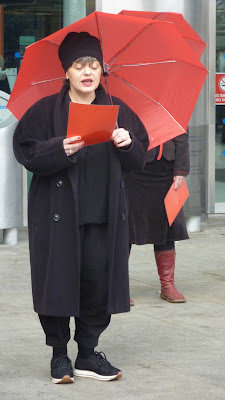 Posted by Words and Women at 10:00 No comments:

Day 2 of our week of celebrations

The exhibition with collaborators Print To The People opens at Nunns Yard Gallery, and Elisabeth 'Bob' Stothers reads Melissa Fu's elegiac Suite For My Father.
The exhibition is open all week and there will be more noon day readings on the 9th & 10th March. Tomorrow afternoon Print To The People will be running a badge-making workshop in the gallery, and Words & Women will be 'Going High' in Norwich city centre. See our dedicated blog page IWD 17 for more details.

Our week of celebrations for International Women's Day has kicked off with Print To The People putting up their exhibition in response to the winning stories from our 2016/17 prose competition in Nunns Yard Gallery, St Augustines Street, Norwich. The exhibition will be open tomorrow from 11.00am - 4.30pm. At noon  tomorrow in Nunns Yard Elizabeth Strothers will read Suite For My Father by Melissa Fu, the regional winner of our competition. 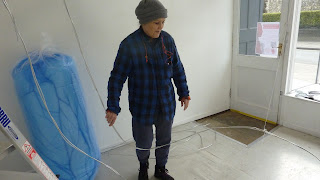 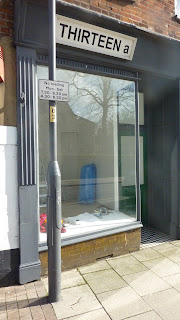 Clare Jarrett is also responding to one of the winning stories - Deborah Arnander's The Wife - by shaping an installation over the next few days in Gallery 13A which is just down the road from Nunns Yard. Here are a few photos of Clare at work. We will put more photos and info up over the week. An overview of the events can be found on our dedicated blog page IWD 17. 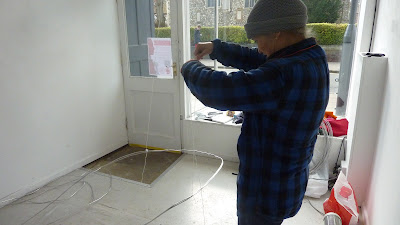 Clare Jarrett is a writer, visual artist (and beekeeper.) Her art has been exhibited both nationally and internationally and she has won various awards; Milner Kite Drawing Prize, Folio Society Illustration Prize, Malvern Open Drawing.  In 2016 Clare was artist in residence at The Barber Shop, Norwich. Her work was included in The Marmite Prize for Painting v, Cley16, Plenty of Time to Lose your Balance, (with Barbara Howey, Sophie Marritt and Molly Thomson) and BAGT, London. In 2017 she took part in Move Your Home Land/S-A-R Projektburo Project, 30 artists from 7 countries.


Elisabeth Stothers  has acted in productions at the Maddermarket Theatre and Great Hall, taking the lead in the Great Hall Players’ production of The Constant Wife, supporting roles in The Vortex and Murder on the Nile. Her most recent role was as a nun, poet, cadet and sword fighting buffoon in Cyrano de Bergerac (Maddermarket). She is looking forward to playing in the upcoming Planet Productions show, Mel Brooks' The Producers at the end of April at the Puppet Theatre.
Posted by Words and Women at 09:18 No comments: