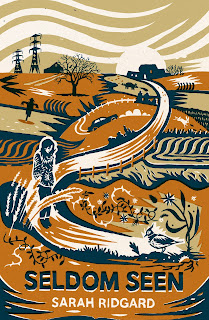 Sarah Ridgard regularly reads her work at Words And Women events and we’ve just heard that her debut novel, Seldom Seen, published by Random House, has been nominated for two prestigious prizes.

The novel has been shortlisted for the Author’s Club Best First Novel Award. The winner will be announced on Monday 3rd June. More information about this prize can be found here.

It has also been longlisted for the Desmond Elliot Prize which celebrates and champions the very best in debut fiction. The shortlist will be announced on the 23rd May and more information about this prize can be found here.

We wish Sarah lots of love and luck, and many congratulations!

Posted by Words and Women at 04:53 No comments: 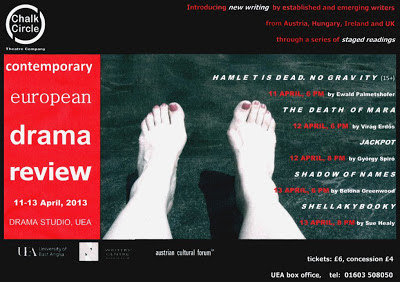 …And I'm thinking, you've left it too long, you've left it too long to write about the review.  You know, the review of the plays put on in the trough time after Easter and before the world shunted itself back into action.  It is too long to recall the full-body immersion in contemporary European theatre put on in the evenings from the 11th to the 13th of April in the UEA Drama Studio. It was like dining out in a restaurant that changed its decor and served up a menu of the unexpected each night.  The Contemporary European Drama Review was a series of staged readings with a visual cohesiveness that gave the plays the air of a full staging.  The staging and performances were such that most of the time, it was not apparent that the actors were reading from a script. It was easy to forget because the readings were so compelling, the presentation so deft.

The Contemporary European Drama Review is the inspiration and work of Adina Levay, artistic director of Chalk Circle Theatre Company, a new company to Norwich which is interested in emerging new writing for the stage and challenging contemporary work.     There were five plays over 3 nights, each play had at its heart the common theme of crisis.  The plays were the following; hamlet is dead. no gravity by Ewald Palmetshofer, an Austrian playwright who has been named as the best young dramatist in the Critics Yearbook in 2008 among other awards and residencies, including one at the Royal Court Theatre in London. The Death of Mara by Virag Erdos, a Hungarian poet, short prose writer and playwright in a translation for the festival by George Szirtes;  Jackpot by Gyorgy Spiro, a celebrated writer and essayist and nationally acclaimed playwright. Shellakybooky written by award-winning Irish writer Sue Healy and Shadow of Names by me, Belona Greenwood made up the slate of local plays in the emerging writers slot.  This is a review of the experience of dining out on the contemporary European plays staged and the excitement and privilege of witnessing how words on a page become a more multi-dimensional and emotional experience in the hands of a good director and talented actors.

I used to think that staged readings were a pretty tame affair; a semi-circle of actors sitting round on plastic chairs under non-specific lighting.  This was certainly not the case with the staging of any of the plays at the review.  In hamlet is dead. no gravity - the actors sat around a long dining table.  The play begins as a dinner to celebrate a grandmother's birthday but Dani and Mani who join their parents, Caro and Kurt, nip off to the funeral of Hannes, where they meet old friends, Oli and Bine who they invite back to the house. It is a tragic reunion in a nihilistic purgatory where the rules of polite engagement fall away to reveal the misery of a world where Heaven is an empty machine, matricide is a dream, incest, banality and acts of moribund evil is reality.  It is a long play, dense with half-said sentences, repetitions and the peeled away surface pretence so the real thoughts of the characters are exposed.  After so much polite and strangled exchange and resignation when action comes it does so with an unexpected explosive power.  Every act and gesture, even down to the careful and mesmerizing peeling of an apple is part of the staging.  Who would have thought that an hour and a half of watching figures seated at a table could be so riveting.

The Death of Mara by Virag Erdos wanders into more surreal territory.  It is an absurd comedy full of resonance with Peter Weiss’ Marat/Sade.  The play is the story of Mara who is murdered in her bath tub first by her father, then her husband and finally her son.  The murdering is witnessed and played with by three bizarre muses desperate for entertainment in a dark, unchanging afterlife.  All the female characters in this play were strongly depicted and all of them have met a violent end. Innocence is exiled and in the end everything is washed down the drain.  The staging of the reading was simple, humorous and much like a disciplined performance art installation, 3 visually strong women with the kind of birds’ nest hair hairdressers dread; adorned in graveyard black bags comment and attempt to intercede in a series of violent and murderous acts against the young innocent, Mara.  Earthiness anchors the visual imagery in the text. The Hungarian-born poet George Szirtes translated this play especially for the Review.  It was a glimpse into a post-feminist musing about the relationships that exist between men and women. As for that final flowing-down the drain it didn’t feel like an ending but more like the beginning of another equally absurd journey.  For me, it had a touch of Dostoevsky travelling beneath the comedy.

Jackpot by Gyorgy Spiro, a celebrated Hungarian writer and playwright was a more accessible play and translated across cultural  borders perfectly.  I think it is a brave comedy exploring a brave act.  It challenges the audience to think what they would do in the same situation.
A middle aged couple win a fortune on the lottery.  This was very funny.  Great characters living with one another in exhausted familiarity with very little in theor pockets try to work out what to do with such a challenging incursion into the everyday.  Drawing their own castles in the air but taking the long view, looking at the impact of such extreme wealth on their lives and the lives of others until the winning ticket is a burden rather than a blessing.  This was a two-hander and Agnes Lilas’ transformation from Birds’ nest head dead muse with a touch of macabre glamour to ground-down middle-aged woman with a heap of spuds to peel on one night was a tour de force in becoming someone other, in the click of a finger.

In this two-headed review – I want to say that Adina and all the actors gave weeks of energy and commitment and put in strong, compelling performances that lifted all the plays as far away as possible from those hand held pages.

Shellekaybooky by Sue Healy, who has won many awards for her writing, is a finely-tuned comedy about the expatriate highs and lows of an Irish family living in Hungary.  The Cooney Family live in a well-heeled bubble which inevitably bursts as a sister from Ireland arrives, their son becomes a radical graffiti artist-hero to the Hungarian anarchist movement, a gay minister comes to dinner and adultery leads to the downfall of a brittle marriage in a business world which exploits corruption and low pay.  The play obliquely comments on the political situation in Hungary.  Sue acted laudably in her own play and this one, moved around with the scripts and although clearly in the hand, they were only partially visible.  It was very funny.  I laughed lots and I don’t laugh easily.

My own play, Shadow of Names is inspired by true stories of workhouse life. It has at its heart the story of a workhouse schoolteacher who seduces one of the inmates who becomes pregnant.  This man who has progressive ideals denies the truth and it is the consequences of the betrayal of truth from a position of authority over those with less power and status that is being explored.  However, it is the poorest who own the moral high ground and those in authority who abuse it to retain privilege and the status quo.  I hope it was emotionally moving to those who saw it and the humour and humanity of the play came through.  I watched part of the first read through and then didn’t see the play in rehearsal again until the performance and it is amazing what Adina and all the actors did with it.  Thank you.

This year was the first European Contemporary Drama Review and it deserves a bigger audience.  I am only sorry that more people who love theatre missed a great opportunity to see some of the best theatre on offer from Austria and Hungary, and new, emerging work.  It was original, visually exciting, deeply penetrating and thought-provoking with a dedicated, talented cast of actors who, under Adina’s direction, gave compelling performances.

Posted by Words and Women at 06:13 No comments: