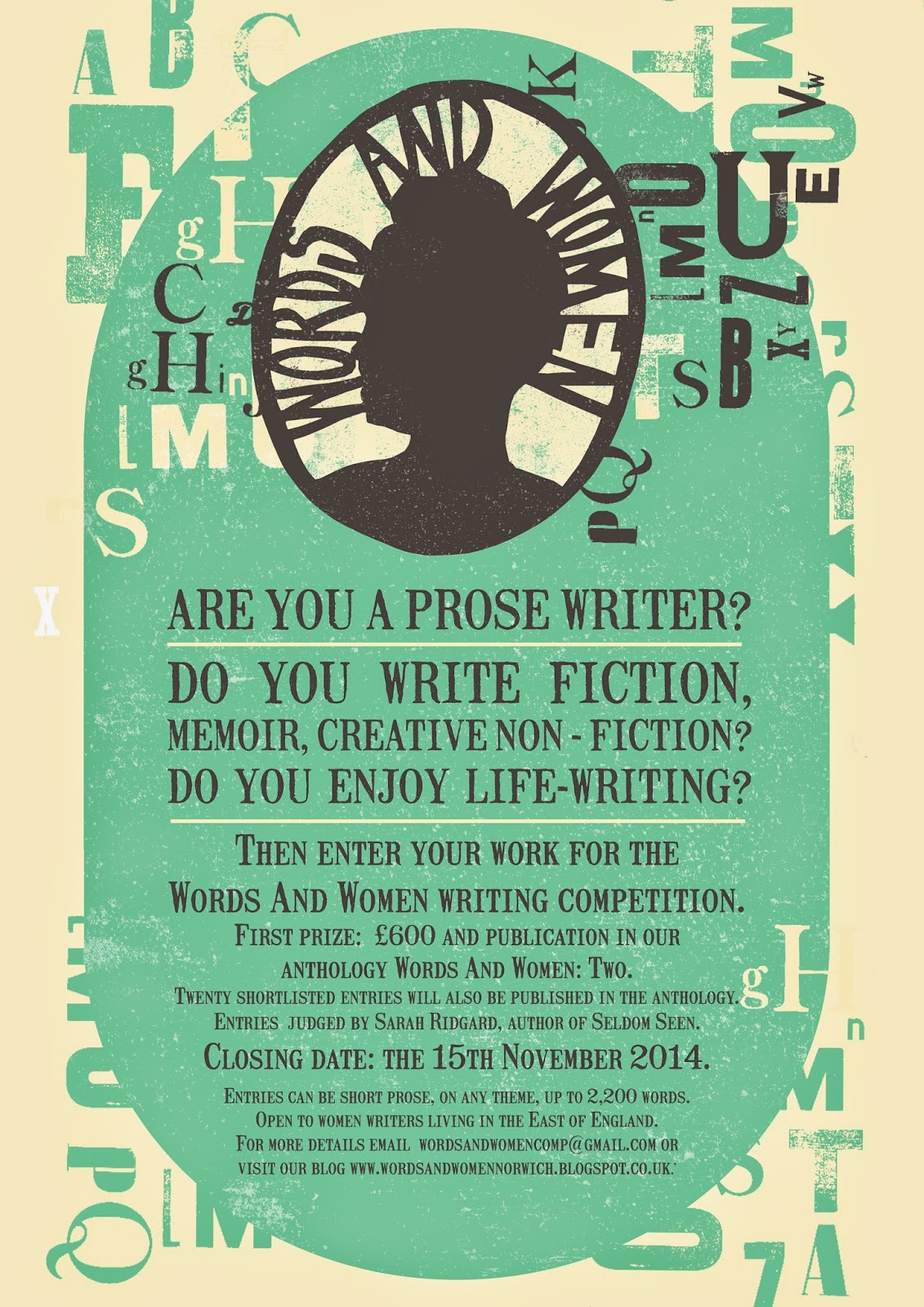 Our 2014 prose competition is open for entries! The winner receives £600 and publication in our next anthology Words And Women:Two. Twenty runners-up will also be published in the anthology. See our dedicated page - 'Prose comp' - for further details.

Posted by Words and Women at 09:32 No comments:

ABOUT mentors and judges 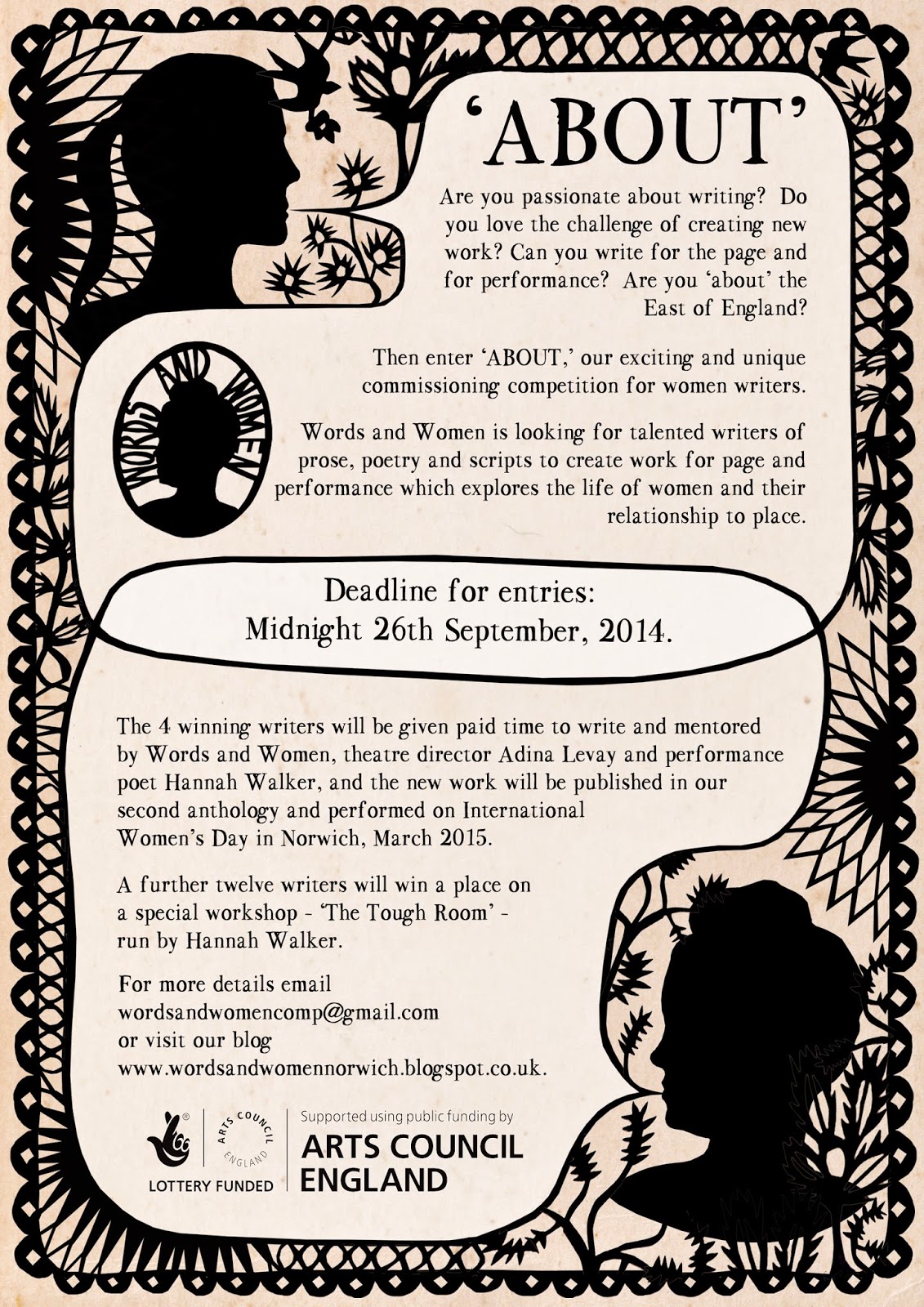 On Friday we launched our amazing new commissioning competition ABOUT which offers women writing in the East of England paid time to write and mentoring to create a text for publication and performance. See our dedicated blog page - About comp -  for more details and information on how to enter.

Below are the profiles of the judges and mentors for ABOUT and also the names of the project’s main supporters, including Arts Council England which has awarded us a generous grant. Thank you to all.

Our four mentors who will judge entries for ABOUT and will help the winning writers to craft their texts are Words And Women organisers Lynne Bryan and Belona Greenwood, theatre director Adina Levay and performance poet Hannah Walker. Our special guest judge is Professor Andrew Cowan, Director of Creative Writing at the University of East Anglia. Lynne’s profile and Bel’s can be found on the ‘We are’ page of this blog. Adina’s profile and Hannah’s and Andrew’s are here: 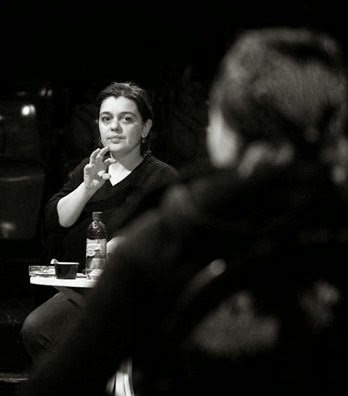 Adina Levay is one of Hungary’s leading theatre directors. She was visiting director at three leading repertory companies: the New Theatre, Budapest, the National Theatre in Miskolc in Hungary, and the Jokai Theatre, in Komarno, Slovakia.
Since coming to the UK, Adina founded and became the Producing Artistic Director of Chalk Circle, a Norwich based small-scale theatre company set up in 2012 to create and produce contemporary and innovative theatre.  For Chalk Circle she produced and directed Alice's Adventure, a new piece of writing by Belona Greenwood and curated by the Norwich Writers' Centre for the Norfolk and Norwich Festival, at the Playhouse. She also produced and directed 4.48 Psychosis at and in partnership with The Garage in Norwich, as well as We Lost Elijah, by Ryan Craig, a joint project with The Garage for the National Theatre Connections Festival, and the Contemporary European Drama Review. 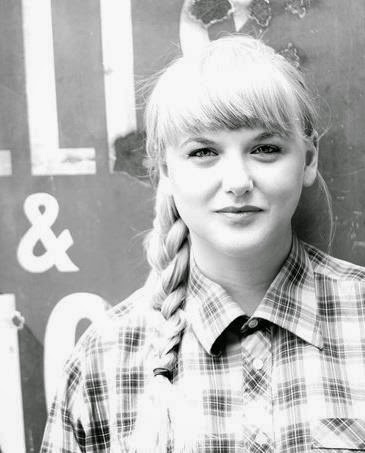 Hannah Jane Walker is an award winning poet, scriptwriter and producer described by What's On Stage as “quietly profound”. Her poems are full of sharp edges and unexpected angles as well as warmth and empathy for fellow humans. With collaborator Chris Thorpe she has made The Oh Fuck Moment, a “clever, strangely poignant mix of poetry and performance” (The Guardian) and I Wish I Was Lonely, “so cunningly and playfully constructed, that it feels like a gift” (The Guardian). The shows are part performance, part poetry gig and part interactive experience; they are about the difficult and uplifting moments we face in the process of trying to be a person. Hannah has toured nationally and internationally, had plays and poems published by Oberon Books, Penned in the Margins and Nasty Little Press among others, she has written for The Guardian, run workshops in widely unusual places such as trains and boats and produced projects which put young people at the centre of their own learning and take creative risks. She believes in being tough on your own writing. She loves collaboration.

ABOUT is supported by Arts Council England, The Forum Trust, Unthank Books, and Writers’ Centre Norwich
Posted by Words and Women at 13:49 No comments:

We are very proud and excited to announce that we have been awarded an Arts Council Grant  For The Arts for our great commissioning project called ‘About’.  Don’t miss out on your chance to be mentored by Words And Women, theatre director Adina Levay and performance poet Hannah Walker, and win one of four commissions worth £950 - £1,400.


Further details about the project can be found on our dedicated blog page - 'About' comp. 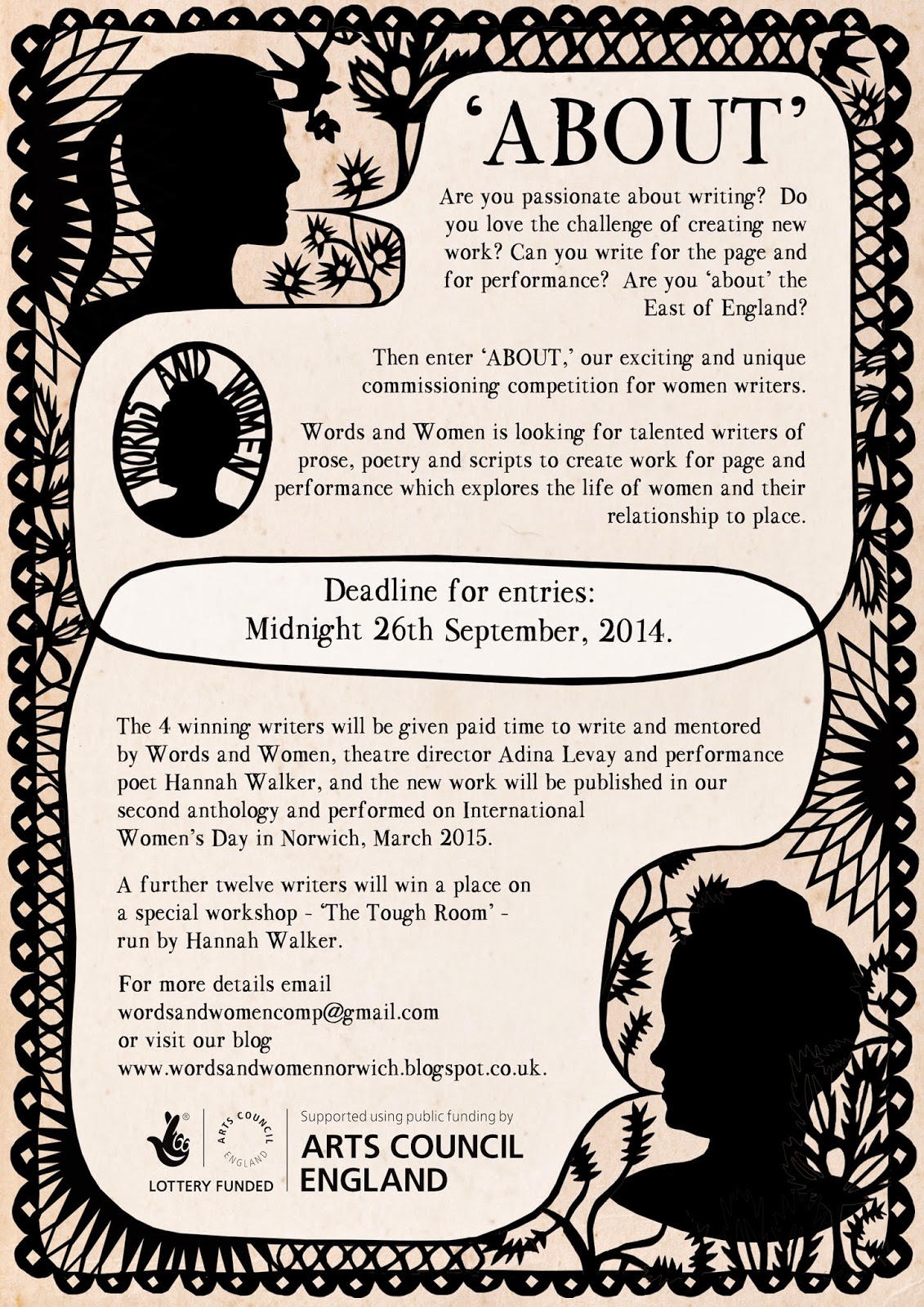 Posted by Words and Women at 15:06 No comments:

Recommended books on the Great War


Bel Greenwood, co-organiser of Words And Women, has spent the past nine months reading books about World War 1. She says: ‘If it comes across as obsessive then I apologise but my reading has been allied to a day job.” The day job is Artistic Director of Wymondham’s Great War Commemoration Day. Click here for more information on this project.

Bel's research led her to discover some brilliant new books on the Great War and rediscover old favourites. Here are a few of her recommended titles, in her own words:

FIGHTING ON THE HOME FRONT by KATE ADIE, published by Hodder and Stoughton. 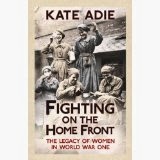 This is an excellent, intimate and inspiring book about the secret history of women during World War 1.  Women were extraordinary, proved they could do it all, did it all, sometimes working 100 hours a week and for less pay than the men and with the knowledge they would go back into the home when no longer required. Kate Adie exposes the attitudes of the day and the way those attitudes were modified by the women.  She also illustrates the battles that women had to fight to be taken seriously, to be valued and to be given the opportunity to be useful on the front line. This is an intimate book, Kate Adie tells individual stories of remarkable women with personal insight.   She reflects on her knowledge of her own family and the way it was in Sunderland in those years.  There are little known names of women in here who should be celebrated.  It’s shameful that Flora Sandes, the only British woman to fight in WW1, who attained the rank of captain, is taught about in Serbian schools but unknown to British children.  I cannot recommend this book highly enough. Although it isn’t a light read, it is vivid and compelling.

TESTAMENT OF YOUTH by VERA BRITTAIN, published by Orion. 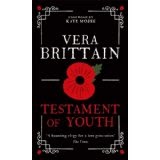 If there is one book that captures the transformation of lives from quiet summer certainty to the terrible, violent loss of loved ones, then this is it.  Vera Brittain’s autobiographical account of a lost generation, alive with detail, passionate and emotionally searing.  It was first published in 1933 and brought Brittain great popularity.  It’s a big book but a fascinating insight into what it was like to be an intelligent, courageous, capable young woman with academic ambitions in a stifling pre-war world and the innocence of first love before the war came along and wrenched her world apart.

LOVE LETTERS OF THE GREAT WAR, edited by Mandy Kirkby, published by Macmillan. 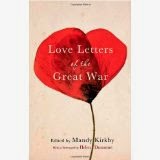 This is such a human book.  There are so many different kinds of love expressed in letters written a century before in the mud of the trenches.  Whether it is a letter from a prince to his wife, or a German soldier to his sweetheart, a British volunteer to his mother, or a father to his children, these are real glimpses into the hearts of people who had to endure the Great War.  The war turned men into poets – there is so much eloquence as well as tenderness and passion in these letters, but also cruelty, jealousy and disdain.  Close to twenty thousand bags of mail crossed the channel every day to reach the trenches at the front. These are a handful of the letters that connected lost worlds.

THE REGENERATION TRILOGY by PAT BARKER, published by Penguin. 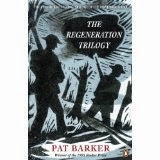 Pat Barker’s masterful trilogy was inspired by her grandfather's experiences in the First World War. Regeneration, the first in the trilogy, is set in the Craiglockhart War Hospital where soldiers were sent to be "cured" of psychological trauma before being trundled back to the front. The story focuses on William Rivers, the therapist whose role of mind-mender in order to return these men to the horrors of the front, becomes increasingly difficult, as he uncovers the traumas and truth of the war.  In his care are the poets, Siegfried Sasson and Wilfred Owen, as well as the fictional Billy Prior.  The trilogy is full of questions about the morality of the war, reflecting the issues and concerns of the Britain of 100 years ago.  It explores the conflict between duty and sympathy and exposes the questions that we must all answer about conflict, duty, sanity and humanity.  I could have read all three books, (Regeneration, The Eye In The Door and The Ghost Road, the latter shortlisted for the Booker Prize in 1995), in one sitting, so compelling is the world, Barker incisively writes into existence.

Posted by Words and Women at 06:56 No comments: