Words And Women receives funding from the Co-Op 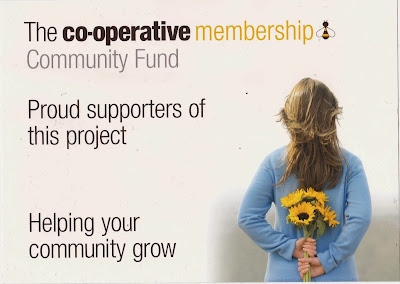 We have just received a generous grant from the Co-Operative Community Fund to help progress our work with young women writers. This is great news as we have great plans! On our Young Women Writers' page you can read a little about the history of this initiative. Then early next year we will reveal in detail the work we will be doing with young women writers from The Hewett School in Norwich in their spring and summer terms. In the meantime we would like to thank the Co-Op and Hayley Ross of The Hewett School too for their support.

Posted by Words and Women at 09:59 No comments: 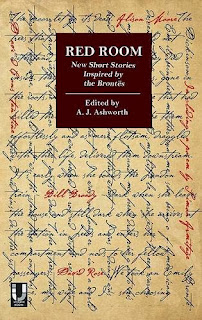 Red Room is a book with a wild and windy moor locked inside.  It is a wonderfully eclectic and strongly evocative collection of new short stories inspired by the Brontes. Moor-life, having lived on one, is solid and ephemeral, shape-shifting and violent, enduring and majestic.  The moor and the hardships  and early deaths of those who lived at Haworth and lower down the hill would have laid siege to the imaginations of the Bronte sisters.

This moor passion is reflected in the anthology which contains a whole weather system of emotions and moods.  Edited by A.J. Ashworth, the collection hosts some marvellous writing from a pantheon of prize-winning writers.  Reading this slim book of 120 pages feels like real travel into a landscape of resonance and echo.  It is exciting and compelling, packed with quiet grief, mischief, delicacy and surprise. It can be quite a game to track the allusions to Bronte-work although some of the stories such as Alison Moore’s satisfying and subversive, Stonecrop, heft the inspirational starting point under the title. Helpfully, the editor has provided a section at the end of the book called Inspirations, where the authors reveal the Bronte nugget that gave rise to their narratives.

Simon Armitage’s  brilliant elegy Emily B, ‘Too much rain in the blood/too much cloud in the lungs.’  acts as the book’s opening marker.  It is followed by some great stories.  Ashton and Elaine by David Constantine is beautifully written and movingly charts a near-mute child subject to adult cruelties in a landscape of ‘hard, ungiving earth,’ but a landscape that cradles a seam of tenderness.  The slow, developing relationship between the lost boy and Elaine is slowly unfolded with compassion and love.

Carys Davies, short and poignant Bonnet, is a masterclass in loneliness, unrequited love and control. It recreates a fictional meeting between Charlotte Bronte and her handsome publisher, George Smith.  Sarah Dobbs, Behind Closed Doors is easily one of the most powerful and memorable short stories I have read this year.  The story of young Henry invisible inside a house of childhood grief after the death of his mother. The darker stories in the collection are offset with comic, playful and tricksy story-telling, whether  Bill Broady’s meeting between Heathcliff and Sherlock Holmes or Zoe King’s Dear Miss, comprised of letters between Emma Woodhouse and Jane Eyre.

Unthank Books have created a beautifully designed book which is also raising funds for the Bronte Birthplace Trust.  It is a proud, wilful, wonderful read for those who love the Brontes and anyone who appreciates great writing. Buy a copy for a loved one this Xmas!

Posted by Words and Women at 11:11 No comments:

Isabelle King, a member of Words And Women, is bringing her wonderful event Books Talk Back to Norwich in January. If you’re a writer or reader of fiction for teenagers or just plain interested in the writing process then this event will be for you. 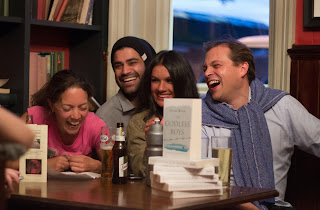 Here Isabelle describes what Books Talk Back is about and gives more details of BTB’s Norwich debut below:

I’m very excited to be writing this piece about Books Talk Back. It’s great to have Words And Women involved with the first Norwich event and to have this chance to explain a bit about the event and why I would love you to come!
Books Talk Back is a non-profit literary event where three or four unpublished authors read an extract of their work to a published author and audience, after which follows a time for the audience to ask questions and give feedback. The authors can also use this time to ask any questions they have about their work. This interactive aspect of Books Talk Back is, I believe, what makes the event unique and, hopefully, very helpful for the writers involved. The first event was in London last September and had a focus on first time novelists writing for any genre. I was thrilled to have Naomi Wood as guest novelist; Naomi answered some questions about her creative process in writing her debut novel ‘The Godless Boys’ and gave some wonderfully insightful and inspiring advice to aspiring authors as well as some lovely anecdotes.
The idea initially came to me after having plugged away on a novel for some time, and whilst I’m still enjoying the process, I can also find it lonely, frustrating and riddled with uncertainty. It’s also something I don’t generally talk about to my friends much either because there’s rarely anything new to say other than ’’yep, still writing that novel.’’
For me, an opportunity to socialise with other aspiring authors and share experiences is always welcome, so I wanted to create an event where this was possible but which also offered some focused and useful help for the writers involved.
I first announced the concept for Books Talk Back to a friend in a pub (all great ideas are born in pubs, right?) and over a pint it seemed like a great idea. Having proudly declared it to all my friends however, the reality began to sink in. There was going to be a lot of work involved! Also, just to add an exciting challenge into the mix, my budget was zero.
Fortunately, my local where I have also worked, The Rose & Crown, South Ealing, were kind enough to let me have a nice, intimate space at the pub which I could use for the event for free. This really worked for me as it’s a cosy and vibrant venue which also, conveniently, sells drinks!
Having contacted Naomi, I was delighted that she was interested in being guest novelist and, thanks to the joys of internet, I could advertise freely. A quick plug for some marvellous people who helped me out -a very talented graphic illustrator John McKeever (jgm.carbonmade.com) designed the e-flyer and Ben Galpin of Malvolio Media(www.malvoliomedia.com)  is an excellent photographer who was on board for taking the pictures.
Finally (drum roll...) the evening arrived.
The four unpublished authors were Maria Hummer, Orlando Brooke, Joyce Greenaway and myself. The twenty guests that night included screenwriters and playwrights as well as prose fiction writers, a member of The Poetry Society, a director of an independent film company, and an award winning comedy duo. In terms of getting critiqued, it was a bit scary switching hats from hosting to reading my work which I’d never read to anyone before, let alone to a room of twenty people. However, despite being a little overwhelming, it was also incredibly liberating and useful. Reading your work to an audience gives you the ability to experience it as other people would in a way you simply can’t when you’re writing alone in your room. The audience gave some thoughtful and constructive feedback and I could finally ask some questions which had been burning away whilst I was writing it; most usefully the experience helped me to make a decision on which time period to set the novel in. As well as being heartening to hear, it was also helpful and motivational to know the positives in my work, giving me an overall stronger idea of what works and what doesn’t. It also struck me that it’s very rare you get the chance to have such detailed and informative critique for free.
So, what’s next? Well, I’ll be hosting the first Books Talk Back event in Norwich in January and I’m thrilled to have Words And Women involved. It’s really great to have the support of an organisation which provides such wonderful opportunities for women writers in the east of England.
I’m delighted to announce that Hayley Long will be guest novelist. The Norwich event will have a focus on teen fiction and Hayley will be answering some questions about her creative process in writing ‘What’s Up With Jody Barton?’ as well as advice she may have for aspiring authors. Hayley gave some really insightful and interesting tips for writers of teen fiction at the last Words And Women event; I’m looking forward to hearing what she has to say!
Books Talk Back will be on Sunday 19th January 2014 2-5pm at The Playroom, which is a lovely, intimate room at Norwich Playhouse.
Please do come along, and get involved! The event is open to men and women and entry is free, and a bar will be open! For more information please visit the blog bookstalkback.wordpress.com or feel free to get in touch bookstalkback@gmail.com

Posted by Words and Women at 14:31 No comments: